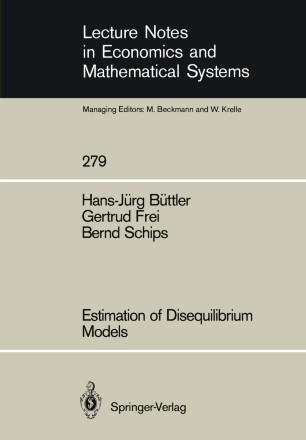 This monograph grew out of a project which was sponsored by the Swiss National Foundation ("Schweizerischer Nationalfonds") under grant no. 4. 636-0. 83. 09. Yithin this project, prediction-oriented estimation methods for the canonical econometric disequilibrium model were developed. The present monograph deals with the application of these estimation techniques to three aggregative markets of the Swiss economy. Parts of the monograph have been presented at various places: the estimation techniques described in chapter 3 at the European Meeting of the Econometric Society, Madrid 1984; the application to residential investment described in chapter 4 at a symposium on housing policy at the University of Mannheim, 1984; the empirical study on the money stock described in chapter 5 at the Symposium on Money, Banking and Insurance held at the University of Karlsruhe, 1984, as well as at a joint seminar of the University of Basle and the Bank for International Settlements (BIS), 1985; and, finally, the empirical study on the aggregate labor market described in chapter 6 at a seminar of the University of ZUrich, 1985. Comments from toe seminar participants, in particular from Palle S. Andersen (BIS) who served as a discussant, Pascal Bridel (Swiss National Bank, SNB), Franz Ettlin (SNB), and Kurt Schiltknecht (Nordfinanz-Bank, Zurich) are gratefully acknowledged, without implying any responsibility on their part. The methodological part described in chapters 2 and 3 is contributed by G. Frei and B.