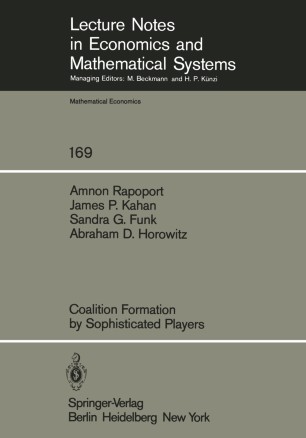 The three major aims of the present study were to (a) test some of the major game-theoretic solutions for n-person games in characteristic function form with data obtained from "rational" players; (b) locate, assess, and explain differences between sophisticated and naive subjects in coalition frequencies and payoff disbursements; and (c) provide a common data base for bargaining process analyses and testing of both present and future models. To this end, five quartets of subjects each partici­ pated in 16 different coalition formation tasks presented as computer-controlled, four-person, characteristic function games with sidepayments. All 20 subjects (a) were relatively mathematically sophisticated, (b) were familiar with the major solution concepts for characteristic function games, (c) could safely assume that their co-players were equally sophisticated and knowledgeable, and (d) possessed a high motivation to maximize reward. The results showed that (a) sophisticated players are less restricted than naive players in coalition choice, (b) their payoffs are less variable and less ~galitarian, (c) these differences between the two populations of sub­ jects increase with the complexity of the game, and (d) for III the four-person, mDstly non-superadditive games played in the present experiment, the bargaining set M~i) accounts more accurately for payoff disbursements than do the competitive bargaining set H~i), the kernel K, and Selten's equal share analysis.