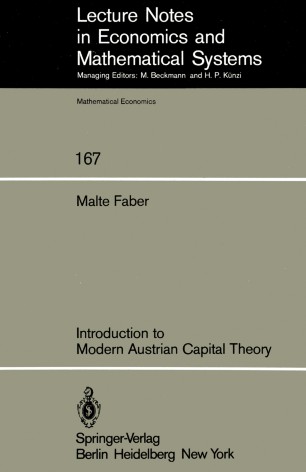 During the fifties and the sixties the neoclassical concept of the production function was criticized in numerous papers. In particular, the aggregation of different capital goods into a single number was reprehended. A second essential disadvantage, namely the neglect of the time structure of the production process, found, however, rela­ tively little attention. While up to the thirties the Austrian capital theory which stressed the time aspect of production was an important school, it fell into oblivion after the great capital controversies of the thirties. It took over thirty years, i. e. till the beginning of the seventies be­ fore it came to a renaissance of the Austrian capital theory by var­ ious writers. We may roughly classify the different attempts of Hits rebirth in modern economics" into three groups: 1. The approach of ~ [1970, 1973, 1973a] has received most of the attention in the literature (Burmeister [1974], Faber [1975], Fehl [1975], ~[1975], Hagemann and ~ [1976]). It will be shown in Chapter 9 that ~ is only in so far a Neo-Austrian as he does explicitly take into consideration the vertical time structure of the production process. But he does not use the Austrian concepts of superiority of roundabout methods, of time preference and of the period of production. 2. The latter concept has been revived by the second group, to which Tintner [1970], von Weizs~cker [1971a, 1971b, 1974], ~ [1971, 1976 and ~ [1973, 1975, 1976] belong.