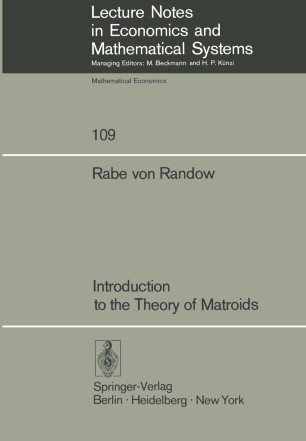 Introduction to the Theory of Matroids

Matroid theory has its origin in a paper by H. Whitney entitled "On the abstract properties of linear dependence" [35], which appeared in 1935. The main objective of the paper was to establish the essential (abstract) properties of the concepts of linear dependence and independence in vector spaces, and to use these for the axiomatic definition of a new algebraic object, namely the matroid. Furthermore, Whitney showed that these axioms are also abstractions of certain graph-theoretic concepts. This is very much in evidence when one considers the basic concepts making up the structure of a matroid: some reflect their linear­ algebraic origin, while others reflect their graph-theoretic origin. Whitney also studied a number of important examples of matroids. The next major development was brought about in the forties by R. Rado's matroid generalisation of P. Hall's famous "marriage" theorem. This provided new impulses for transversal theory, in which matroids today play an essential role under the name of "independence structures", cf. the treatise on transversal theory by L. Mirsky [26J. At roughly the same time R.P. Dilworth estab­ lished the connection between matroids and lattice theory. Thus matroids became an essential part of combinatorial mathematics. About ten years later W.T. Tutte [30] developed the funda­ mentals of matroids in detail from a graph-theoretic point of view, and characterised graphic matroids as well as the larger class of those matroids that are representable over any field.