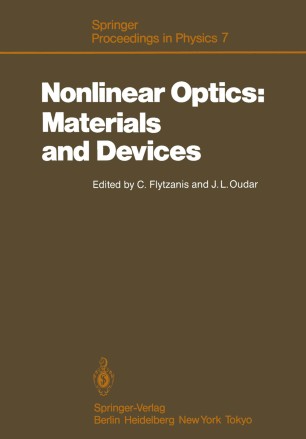 Proceedings of the International School of Materials Science and Technology, Erice, Sicily, July 1–14, 1985

The field of nonlinear optics has witnessed a tremendous evolution since its beginnings in the early sixties. Its frontiers have been extended in many direc­ tions and its techniques have intruded upon many areas of both fundamental and practical interest. The field itself has been enriched with many new phe­ nomena and concepts that have further extended its scope and strengthened its connection with other areas. As a consequence, it is becoming increasingly unrealistic to expect to cover the different facets and trends of this field in the lectures or proceed­ ings of a summer school, however advanced these may be. However much of the current progress and interest in this field springs to a large extent from the promise and expectation that highly performing all-optical devices that exploit and operate on the principles of nonlinear optics will constitute an important branch of future technology and will provide new alternatives in information processing and transmission. The conception of new devices, in general, requires an intricate and bold combination of facts and methods from most diverse fields, in order to perform functions and operations that fit into an overall technological ensemble.