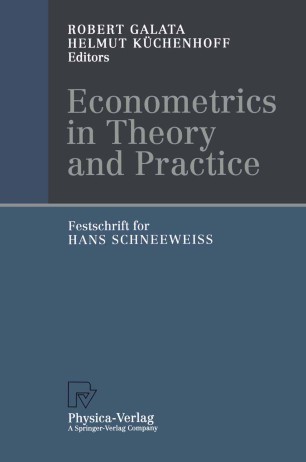 Econometrics in Theory and Practice

Hans SchneeweiB is- one of the best-known German econometricians and statisticians. He was born in Glatz, Silesia, on March 13, 1933. Hans SchneeweiB studied mathematics and physics and received his Ph. D. degree from the Johann-Wolfgang-Goethe University, Frankfurt, in 1960. He was member of the academic staff of the Faculty of Law and Economics of the Saar University between 1959 and 1965. Following his Habilitation in 1964, he was appointed to the chair of Statistics and Econometrics at the same university. As a visiting professor he worked at the Institute for Aca­ demic Studies in Vienna in 1967 and at the Department of Statistics of the University of Waterloo, Canada, in 1970/71. He has been a full professor of Econometrics and Statistics at the Ludwig-Maximilians-University in Mu­ nich since 1973. His extensive research activities abroad included important projects in Waterloo, Vienna, Dundee (Scotland), Sidney, China, Kiev. During the more than 40 years of his academic work he has published outstanding, original articles on econometrics and statistics. To give an ex­ ample, it is his research on decision theory which has marked developments in this field. His book Entscheidungskriterien bei Risiko, published in 1967, is an excellent starting for anyone looking for an introduction to the complex iSsues involved.