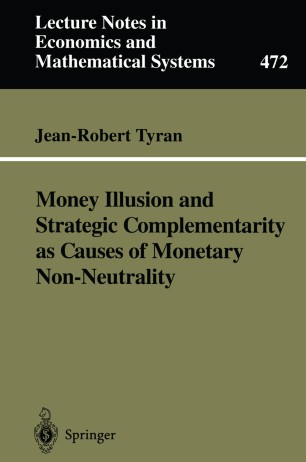 Money Illusion and Strategic Complementarity as Causes of Monetary Non-Neutrality

In principle, money illusion could explain the inertial adjustment of prices after changes of monetary policy. Hence, money illusion could provide an explanation of monetary non-neutrality. However, this explanation has been thoroughly discredited in modern economics. As a consequence, economists have ever since the 1970s searched for alternative explanations for nominal rigidity. These explanations are all based on the assumption of fully rational economic agents, holding rational expectations. This book argues that money illusion has been prematurely dismissed as an explanation of monetary non-neutrality. Methods of experimental economics are used to investigate the real aggregate effects of money illusion. It is shown that money illusion in fact causes (short-run) real income effects if strategic complementarity prevails. Strategic complementarity is an important characteristic of naturally occurring macroeconomies and is a recurrent theme in most models explaining nominal rigidity.