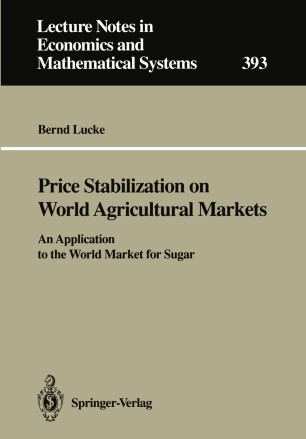 An Application to the World Market for Sugar

International commodity markets have traditionally attracted the attention of economists, econometricians, and policy makers especially in and following politically tumultuous times. For instance, the primary commodity price boom of 1973/74 and the subsequent period of highly volatile world market prices initiated increased research on commodity markets which quickly focused on possible price stabilization schemes, particularly on buffer stocks. Simultaneously, the issue clearly advanced in priority on the political agenda, such that the United Nations Conference on Trade and Development (UNCTAD) proposed an "Integrated Program for Commodities" (IPC) intended to stabilize the world market prices of ten so-called "core commodities"l (UNCTAD (1974, 1976a), Behrman (1979)). Many developing nations welcomed the IPC almost enthusiastically, but it did not receive more than lukewarm support by major industrialized countries, apparently due to the experience with some thirty international commodity agreements past World War II2. Critical evaluations have, among others, been presented by McNicol (1978), Gordon-Ashworth (1984), and Macbean & Nguyen (1987). The most detailed of these studies is Gordon-Ashworth's, who concludes that "on balance ... the performance of international commodity agreements has been too unreliable and their distributive effects too uneven to secure the development goals that have been set" (1984, p. 284)3. Consequently, the IPC turned out to be quite controversial a topic on the UNCTAD's 1976 meeting in Nairobi and has not been able to gain any impetus since. lThese were cocoa, coffee, copper, cotton, jute, rubber, sisal, sugar, tea, and tin.