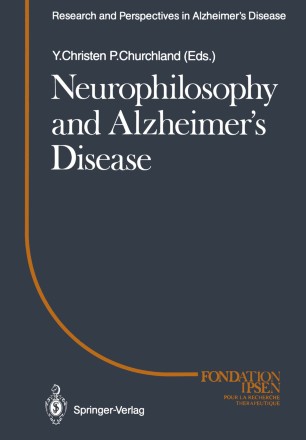 Any mention of the relationship, still poorly understood, between body (or brain) and mind invariably invokes the name of Descartes, who is often thought of as the father of modern philosophy and perhaps of neurophilosophy. Although a native of the heart of France (the region around Tours), Rene Descartes travelled widely, as everyone knows, especially to Holland and Sweden. It should come as no surprise, that the Congress of Neurophilosophy and Alzheimer's Disease was the first in the series of Fondation Ipsen Colloques Medecine et Recherche to be held outside France. The meeting was held in San Diego (California) on January 11, 1991. This venue was chosen for a number of reasons. The University of California San Diego is without doubt one of the most dynamic universities today. A good number of friends of the Fondation Ipsen who have taken part as speakers in previous conferences are based there. Patricia Churchland, whose publications have helped "launch" the term "neurophilosophy", also teaches there. The choice of this particular venue gave us the welcome opportunity of benefiting directly during the conference from the participation of many eminent (including some Nobel Prize-winning) scientists, including biochemists, neuro­ scientists and "alzheimerologist", psychologists, cognitive science specialists and philosophers.