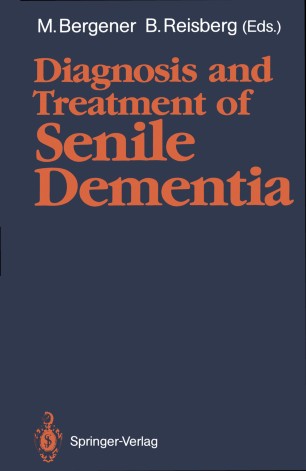 Diagnosis and Treatment of Senile Dementia

Senile dementia is one of the major health problems confronting mankind in this century. To some extent the problem has, of course, always existed. The condition was sufficiently troubling to classical philosophers and jurists to have apparently provoked comments by Solon in approximately 500 B. C. and Plato in the fourth century B. C. (Plutarch 1967 translation; Plato 1921 translation). Medical recognition can be traced at least as far back as the second century A. D. (Adams 1861). However, several factors have converged in this century to extend the absolute dimensions of the problem of senile dementia and to increase societal, medical, and scientific recogni­ tion of the magnitude of the condition. Perhaps the most important factor relating to the present importance of senile dementia is demographic. Although the human population has been increasing since the mid-eighteenth century, it has only been since the advent of the twentieth century that a decrease in mortality has been noted for those over the age of 45 (McKeown 1976). Consequently, the absolute number of aged persons and the proportion of increasingly aged persons in the populations of the world's industrial nations have been steadily increasing. For example, in the United States, 4% ofthe population was over the age of 65 in 1900. In the 1970 census, this proportion had grown to 10%.