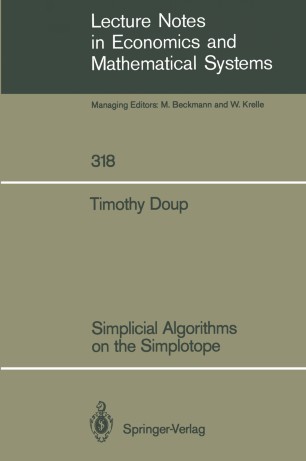 Simplicial Algorithms on the Simplotope

1.1. Introduction Solving systems of nonlinear equations has since long been of great interest to researchers in the field of economics, mathematics, en­ gineering, and many other professions. Many problems such as finding an equilibrium, a zero point, or a fixed point, can be formulated as the problem of finding a solution to a system of nonlinear equations. There are many methods to solve the nonlinear system such as Newton's method, the homotopy method, and the simplicial method. In this monograph we mainly consider the simplicial method. Traditionally, the zero point and fixed point problem have been solved by iterative methods such as Newton's method and modifications thereof. Among the difficulties which may cause an iterative method to perform inefficiently or even fail are: the lack of good starting points, slow convergence, and the lack of smoothness of the underlying function. These difficulties have been partly overcome by the introduction of homo­ topy methods.