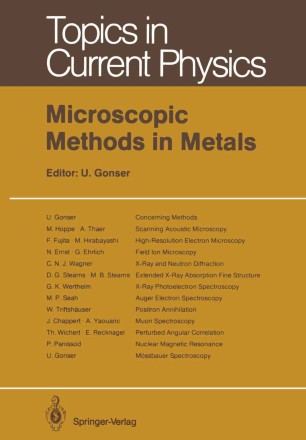 Methods of scientific investigation can be divided into two categories: they are either macroscopic or microscopic in nature. The former are generally older, classical methods where the sample as a whole is studied and various local prop­ erties are deduced by differentiation. The microscopic methods, on the other hand, have been discovered and developed more recently, and they operate for the most part on an atomistic scale. Glancing through the shelves of books on the various scientific fields, and, in particular, on the field of physical metallurgy, we are surprised at how lit­ tle consideration has been given to the microscopic methods. How these tools provide new insight and information is a question which so far has not at­ tracted much attention. Similar observations can be made at scientific confer­ ences, where the presentation of papers involving microscopic methods is often pushed into a far corner. This has led users of such methods to organize their own special conferences. The aim of this book is to bridge the present gap and encourage more interaction between the various fields of study and selected microscopic meth­ ods, with special emphasis on their suitability for investigating metals. In each case the principles of the method are reviewed, the advantages and successes pointed out, but also the shortcomings and limitations indicated.