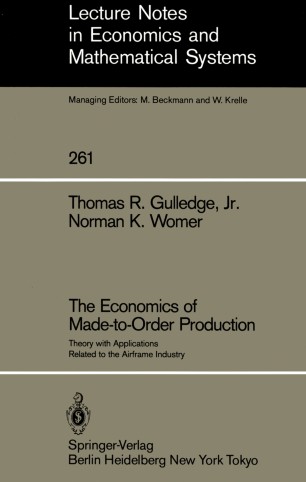 The Economics of Made-to-Order Production

Theory with Applications Related to the Airframe Industry

The airframe industry is usually recognized as being different from most manufacturing industries. These differences, which are characterized by the number of units produced and the frequency of design changes, have been evident for many years. This uniqueness and the corresponding implications for cost estimation became particularly evident during World War II. The aircraft industry generally has been considered unique in that it differs from other manufacturing in the quantity of units manufactured and with the frequency with which changes are made during the course of manufacturing operations. In mass-production industries, manufacturing thousands or hundreds of thousands of identical units, methods and cost of production tend to remain fairly constant after production has been stabilized, whereas in the aircraft industry, method improvements are constantly being made and cost is a variable depending on the number of airplanes being manufactured (Berghell, 1944). These differences, coupled with political considerations, place unusual demands on cost modelers. This has been particularly true in recent years where large cost overruns have generated Congressional demands for better cost estimates. Traditionally, cost estimators in the airframe industry have used one or more of the following estimating techniques: 1. industrial engineering time standards, 2. parametric cost estimating models, 3. learning curves. All of the methods have been used with mixed results in specific situations. The general emphasis of all three approaches is cost estimation for planning purposes prior to beginning production, although some of the techniques may be used during the production phase of a program.