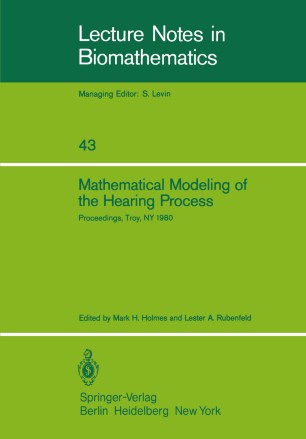 Mathematical Modeling of the Hearing Process

The articles of these proceedings arise from a NSF-CBMS regional conference on the mathematical modeling of the hearing process, that was held at Rensselaer Polytechnic Institute in the summer of 1980. To put the a=ticles in perspective, it is best to briefly review the history of suc~ modeling. It has proceeded, more or less, in three stages. The first was initiated by Herman Helmholtz in the 1880's, whose theories dominated the subject for years. However, because of his lack of accurate experimental data and his heuristic arguments it became apparent that his models needed revision. Accordingly, based on the experimental observations of von Bekesy, the "long wave" theories were developed in the 1950's by investigators such as Zwislocki, Peterson, and Bogert. However, as the ex?eri~ents became more refined (such as Rhode's ~wssbauer Measurements) even these models came into question. This has brought on a flurry of 'activity in recent years into how to extend the models to account for these more recent eXT. lerimental observations. One approach is through a device co~monly refered to as a second filter (see Allen's article) and another is through a more elaborate hydroelastic model (see Chadwick's article). In conjunction with this latter approach, there has been some recent work on developing a low frequency model of the cochlea (see Holmes' article).