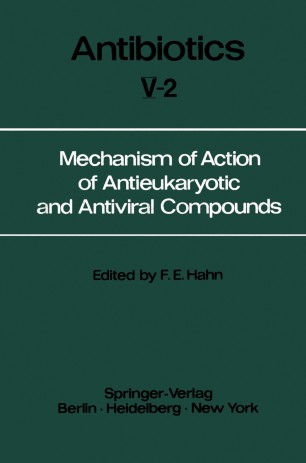 Mechanism of Action of Antieukaryotic and Antiviral Compounds

When Antibiotics I was published in 1967, the teleological view was held by some that" antibiotics" were substances elaborated by certain microorgan­ isms for the purpose of competing with other microorganisms for survival in mixed ecological environments. However, not only had J. EHRLICH and his associates shown 15 years earlier that chloramphenicol was produced by Strepto­ myces venezuelae in cultures of sterilized soils but not in parallel cultures of the same soils which were not sterilized, but operationally, the search for anti­ cancer antibiotics was actively under way (Antibiotics I reporting on numerous such substances), although the concept of antibiosis could not logically justify such undertakings. This editor hesitates to accept the use of the term "antibiotic" for anti­ microbial agents of non microbiological origins which is sometimes encountered, but neither does he subscribe to the view that antibiotics are in some fundamental manner different from chemotherapeutic substances of other origins. Modes and mechanisms of action of chemotherapeutic compounds are not systematic functions of their origins nor of the taxonomical position of the target organisms. Consequently, in the selection of topics for Antibiotics III (published in 1975), synthetic drugs and natural products of higher plants (alkaloids) were represented, along with antibiotics in the strict sense of the definition. We now present Antibiotics V, for whose assembly the same selection criteria were applied as for Antibiotics Ill. The aggregate length of the contributions rendered it impractical to place the entire text between the covers of one book.