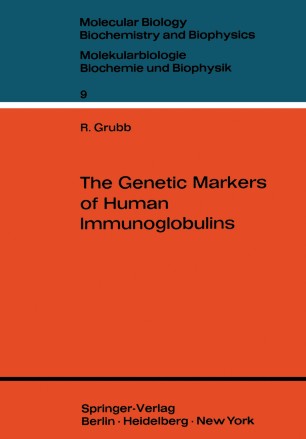 The Genetic Markers of Human Immunoglobulins

It has long been known that every individual has a large number of antibodies of different specificities. Antibodies are gammaglobulins, and protein structure in cells is genetically determined. The extreme multiplicity of structure of the combining sites of antibodies relative to the degree of multiplicity generated by ordinary genetic mechanisms is a fascinating problem of bio-medical importance. The functional heterogeneity of reactions mediated by immunoglobulins-is remarkable, ranging from protection against life-threatening toxins and microbes to the production of laryngeal edema leading to suffocation and death from anaphylaxis. An approach to the understanding of immunoglobulin polymorphism based upon "a knowledge of genetic markers of immunoglobulin structure is not biased by the question of whether or not this polymorphism is related to combining site diversity. Though several recent reviews of the multifacetted problems related to immuno­ globulins are available, it was decided to publish this survey in the belief that know­ ledge of the genetic markers of immunoglobulins prqvides such information about immunoglobulin differentiation and its control as cannot be obtained from other sources. Several of the human genetic im~unoglobulin markers are well understood at the molecular level. The Gm system may serv~ as a model for other immuno­ genetic systems. The published data on the human immunoglobulin factors are widely scattered in journals of different perspectives. There is a need for a systematic presentation of these data and for their critical evaluation.