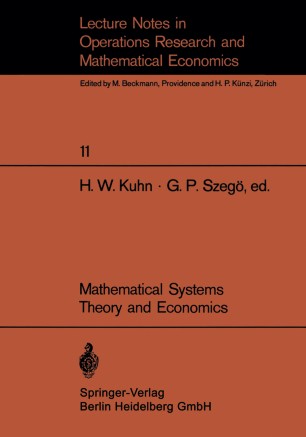 The International Summer School on Mathematical Systems Theory and Economics was held at the Villa Monastero in Varenna, Italy, from June 1 through June 12, 1967. The objective of this Summer School was to review the state of the art and the prospects for the application of the mathematical theory of systems to the study and the solution of economic problems. Particular emphasis was given to the use of the mathematical theory of control for the solution of problems in economics. It was felt that the publication of a volume collecting most of the lectures given at the school would show the current status of the application of these methods. The papers are organized into four sections arranged into two volumes: basic theories and optimal control of economic systems which appear in the first volume, and special mathematical problems and special applications which are contained in the second volume. Within each section the papers follow in alphabetical order by author. The seven papers on basic theories are a rather complete representative sample of the fundaments of general systems theory, of the theory of dynamical systems and the theory of control. The five papers on the application of optimal control to economic systems present a broad spectrum of applications.