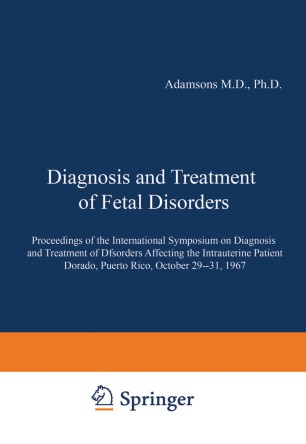 Diagnosis and Treatment of Fetal Disorders

Proceedings of the International Symposium on Diagnosis and Treatment of Disorders Affecting the Intrauterine Patient, Dorado, Puerto Rico, October 29–31, 1967

HOWARD C. TAYLOR, JR. Medicine, through its long history, has continually striven to enlarge its scope. Success in these endeavors has come in sudden bursts with long intervals of relative quiescence between. As a result of the spectacular discoveries in the basic sciences during the last decades, medicine is again in a period of revolutionary advance in many fields. One of these is the subject of this report, "The Intrauterine Patient." Until recently the fetus signalized his presence only by the mother's enlarging abdomen and by his own movements, perceived by the preg­ nant woman herself and evident to the examining midwife and physician. Later, the sounds of the fetal heart heard by auscultation and the varia­ tions in its rate became the single important means by which the welfare of the fetus might be roughly determined and threats to his survival per­ haps detected. Otherwise, the fetus remained isolated, his condition unknown and any therapy consequent on diagnosis, except for the induc­ tion or termination of labor, nonexistent.