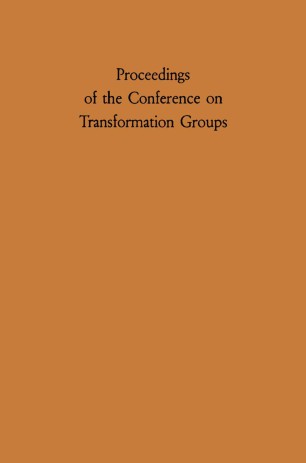 Proceedings of the Conference on Transformation Groups

These Proceedings contain articles based on the lectures and in­ formal discussions at the Conference on Transformation Groups held at Tulane University, May 8 to June 2, 1967 under the sponsorship of the Advanced Science Seminar Projects of the National Science Foun­ dation (Contract No. GZ 400). They differ, however, from many such Conference proceedings in that particular emphasis has been given to the review and exposition of the state of the theory in its various mani­ festations, and the suggestion of direction to further research, rather than purely on the publication of research papers. That is not to say that there is no new material contained herein. On the contrary, there is an abundance of new material, many new ideas, new questions, and new conjectures~arefully incorporated within the framework of the theory as the various authors see it. An original objective of the Conference and of this report was to supply a much needed review of and supplement to the theory since the publication of the three standard works, MONTGOMERY and ZIPPIN, Topological Transformation Groups, Interscience Pub­ lishers, 1955, BOREL et aI. , Seminar on Transformation Groups, Annals of Math. Surveys, 1960, and CONNER and FLOYD, Differen­ tial Periodic Maps, Springer-Verlag, 1964. Considering this objective ambitious enough, it was decided to limit the survey to that part of Transformation Group Theory derived from the Montgomery School.