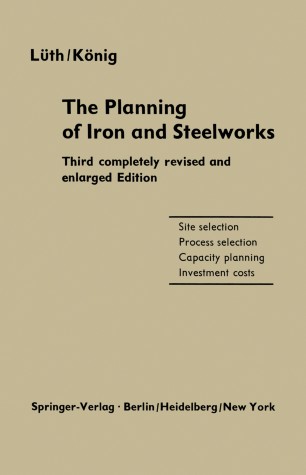 The Planning of Iron and Steelworks

At the present time, we are witnessing a period of vigorous growth in the iron and steel industries of the older industrialised countries. Looking farther afield, we find that iron and steel indus­ tries are also being established in countries that have in recent years gained their independence, countries that hitherto had no iron and steelworks at all, or none of any great significance. This situation produces a certain diversity in the planning and building of iron and steelworks. In the first case, high-capacity iron and steelworks are built on the basis of conventional, tried-and­ tested processes, or existing plant is extended; in the second case, considerably smaller works have to be planned, and very often newer or unorthodox metallurgical processes must be used to cater for the specific raw materials available to the country in question. Following this change in the tasks of the planning engineer, and in view of the new iron and steelmaking methods developed in the meantime, the decision was taken to revise and enlarge F. LUTH's "Planung und Bau von Hiittenwerken", the first and second editions of which were published in the German language by the Springer­ Verlag in 1955 and 1957 respectively. In addition, the services of a second well-known expert in this field were secured for the preparation of the revised edition.