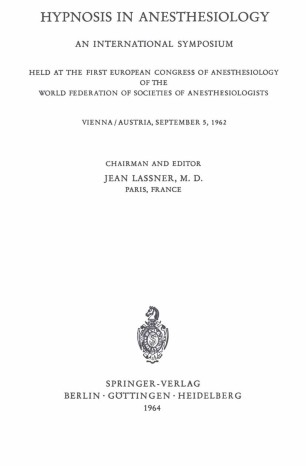 During the First European Congress of Anesthesiology, held in Vienna, Austria, in September, 1962, panel discussions on nineteen different subjects were held, each lasting approxi­ mately three hours. One, concerning Controversial Aspects of Resuscitation, was later edited by its chairman, PETER SAFAR, and published in 1963. At the request of the publisher, the discussion on hypnosis has been edited in a similar manner. The participants in the discussion on Hypnosis in Anes­ thesiology had agreed, prior to the meeting, on a list of questions to be debated, and Dr. STOKVIS' introductory statement on the nature of hypnosis was circulated among them in appropriate translations in order to give the debate a starting point. It had also been agreed that no formal papers should be read after this introduction, and that the participants should use at will the German, English or French language. Following each contribution it was the chairman's task to give a brief summary in the two other languages. Discussion was therefore somewhat slowed down and occasionally rendered difficult by misunderstandings or the omission of details. Drs. GUEGUEN, MOSCONI, and VOLGYESI, who were not able. to attend, had sent written contributions which the chairman presented briefly during the discussion. The present text has been worked out of the tape recording of the discussion and the chairman's correspondence with the panelists some time after the meeting. Whenever the original contributions were in French or German, the English translation has been the chairman's.