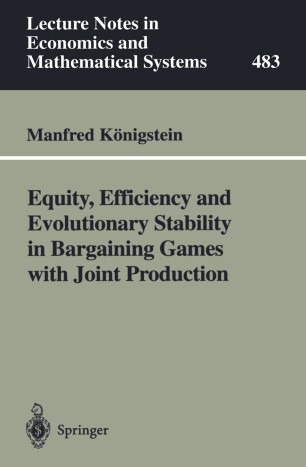 Result 1.10 Simple equity standards were superior to more complex ones, even though the latter might be economically more relevant. Result 1.11 Equity based on quantity (input) and return (output) was most successful and received a hit rate of almost i within a range of 10%, i.e., within a distance of ±5% of the predicted share. Result 1.12 A substantial share of observations is consistent with egalitarian considerations. 1.7 Summary The study investigates the predictive power of equity theory and strategic concepts within ultimatum bargaining with advance produc­ tion. This is different from many other experimental studies on non­ cooperative bargaining games, since usually the ressource to be dis­ tributed between the subjects is given by the experimenter. Here, the "pie" is produced via joint production effort. This scenario is more general than bargaining without production, and we think it is more natural as well. The description of the raw data showed that the production choices are considerably dispersed, but nevertheless systematically biased to­ ward the respective player's efficient production level. The distribu­ tions of demanded return shares and demanded surplus shares partly replicated findings of other studies; namely, a low percentage of high demands and a considerable proportion of equal surplus splits. But, they also indicate that "advance production" compared to "no pro­ duction" should be considered an important treatment in studies on ultimatum bargaining.