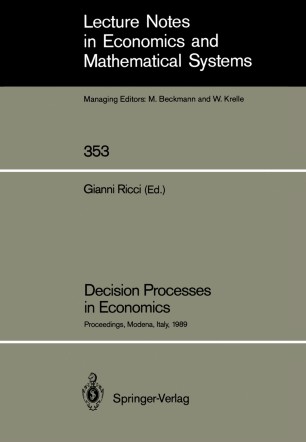 This book contains a selection of the papers presented at the symposium on "Decision processes in Economics" which was held in Modena (Italy) on 9-10 October 1989. It coincided with the annual meeting of the italian group on Game Theory; the group is formed by economists, mathematicians, engineers and social scientists. One of the targets of the Meeting, and therefore of the book, is to create an opportunity for having together papers by scientists with an "optimal control" education and papers by theorists on refinement of equilibrium, on repeted games and other topics. These two modes of working on Games are quite different but we think that a unitary approch to Games can be given and this book is an attempt in this direction. Another important and updated issue which is emphisized in the book is the discussion of computation and efficiency of numerical methods in Games. Stochastic differential games are treated in the papers by Basar, Haurie -and Deissemberg. Basar considers a stochastic model of a conflict situation between the monetary policy maker (go­ vernment) and the responding agent (private sector). Because of asymmetry in the (stochastic) information available the Nash and the Stackelberg games become non standard stochastic diffe­ rential games. After the discussion of the conditions leading to a solution he provides a numerical example for the proposed game. Haurie considers a game where the observed state changes according to a stochastic jump process.