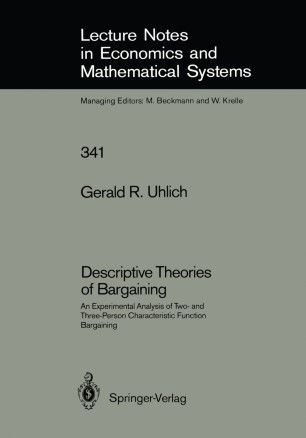 An Experimental Analysis of Two- and Three-Person Characteristic Function Bargaining

The aim of this book is the presentation of two new descriptive theories for experimental bargaining games and a comparison with other descriptive and normative theories. To obtain data it was necessary to develop two sets of computer programs for computer controlled ex­ periments. Moreover, data obtained by other researchers, which are available to us will be included in this study. The use of laboratory experiments in economics was introduced by THURSTONE [1931] in the field of utility theory. CHAMBERLIN [1948] was the first person to establish an expe­ rimental market for the purpose of testing a theory. The first experiment on characteristic function games was done by KALISH, MILNOR, NASH, and NERING [1954]. Today the use of experiments in controlled laboratory settings has become widespread. Earlier, economists went into the field to observe phenomena as the behavior of individuals, corporations and nations in action, then they formulated theories to explain what they saw. But unlike natural scientists, economists have not been able to test their theories under controlled conditions. Now experimental economists are able to replicate their results. Replication is very proble­ matic for field studies, because rarely the same conditions can be established again. Moreover, experimenters are able to test theories for situations described by simplified models which are not observable in the real world.