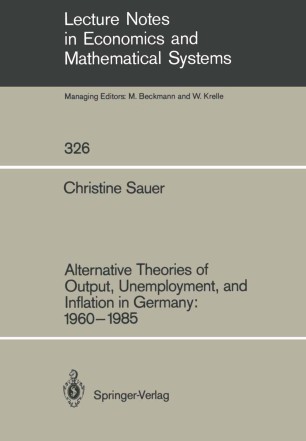 Alternative Theories of Output, Unemployment, and Inflation in Germany: 1960–1985

by Jerome L. Stein Disenchantment with Keynesian econollics developed during the post-1968 period when the rate of growth of output declined, the rate of unemployment rose, and the rate of inflation increased in the U.S. and in other countries. This paradox, called stagflation, was inconsistent with the tenet of Keynesian economics that cyclical movemants in prices and output relative to their respective trends are positively correlated. A search occurred for a more satisfactory theory of macroeconomics which could explain the paradox of stagflation and the observed economic phenomena. The New Classical Economics (NCE) developed as the total rejection of Keynesian economics. The Keynesians claimed that their demand management policies contributed to the obsolescence of the business cycle and successfully eliminated the gap between full employment (potential) output and actusl output. The NCE argued just the opposite: the unemplo~nt rate or growth rate of real output is insensitive to systematic demand management policies [Lucas; Sargent and Wallace].