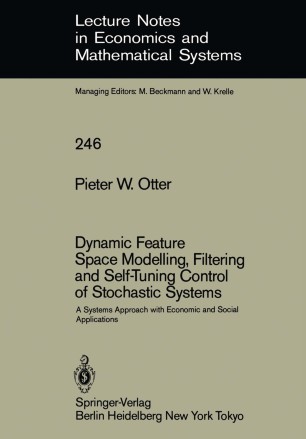 A Systems Approach with Economic and Social Applications

The literature on systems seems to have been growing almost expo­ nentially during the last decade and one may question whether there is need for another book. In the author's view, most of the literature on 'systems' is either technical in mathematical sense or technical ifF engineering sense (with technical words such as noise, filtering etc. ) and not easily accessible to researchers is other fields, in particular not to economists, econometricians and quantitative researchers in so­ cial sciences. This is unfortunate, because achievements in the rather 'young' science of system theory and system engineering are of impor­ tance for modelling, estimation and regulation (control) problems in other branches of science. State space mode~iing; the concept of ob­ servability and controllability; the mathematical formulations of sta­ bility; the so-called canonical forms; prediction error e~timation; optimal control and Kalman filtering are some examples of results of system theory and system engineering which proved to be successful in practice. A brief summary of system theoretical concepts is given in Chapter II where an attempt has been made to translate the concepts in­ to the more 'familiar' language used in econometrics and social sciences by means of examples. By interrelating concepts and results from system theory with those from econometrics and social sciences, the author has attempted to narrow the gap between the more technical sciences such as engi­ neering and social sciences and econometrics, and to contribute to either side.