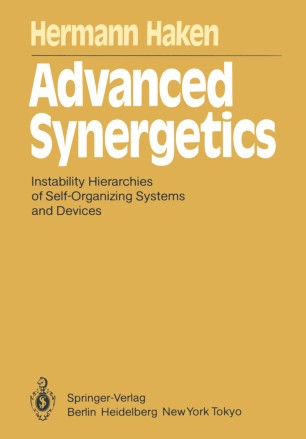 This text on the interdisciplinary field of synergetics will be of interest to students and scientists in physics, chemistry, mathematics, biology, electrical, civil and mechanical engineering, and other fields. It continues the outline of basic con­ cepts and methods presented in my book Synergetics. An Introduction, which has by now appeared in English, Russian, J apanese, Chinese, and German. I have written the present book in such a way that most of it can be read in­ dependently of my previous book, though occasionally some knowledge of that book might be useful. But why do these books address such a wide audience? Why are instabilities such a common feature, and what do devices and self-organizing systems have in common? Self-organizing systems acquire their structures or functions without specific interference from outside. The differentiation of cells in biology, and the process of evolution are both examples of self-organization. Devices such as the electronic oscillators used in radio transmitters, on the other hand, are man­ made. But we often forget that in many cases devices function by means of pro­ cesses which are also based on self-organization. In an electronic oscillator the motion of electrons becomes coherent without any coherent driving force from the outside; the device is constructed in such a way as to permit specific collective motions of the electrons. Quite evidently the dividing line between self-organiz­ ing systems and man-made devices is not at all rigid.