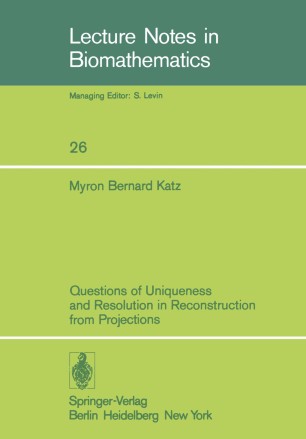 Questions of Uniqueness and Resolution in Reconstruction from Projections

Reconstruction from projections has revolutionized radiology and has now become one of the most important tools of medical diagnosis The E. M. I. Scanner is one example. In this text, some fundamental theoretical and practical questions are resolved. Despite recent research activity in the area, the crucial subject of the uniqueness of the reconstruction and the effect of noise in the data posed some unsettled fundamental questions. In particular, Kennan Smith proved that if we describe an object by a C^inf_o function, i.e., infinitely differentiable with compact support, then there are other objects with the same shape, i.e., support, which can differ almost arbitrarily and still have the same projections in finitely many directions. On the other hand, he proved that objects in finite dimensional function spaces are uniquely determined by a single projection for almost all angles, i.e., except on a set of measure zero. Along these lines, Herman and Rowland in "Three Methods for reconstructing objects from x-rays: a comparative study" (1973)  showed that reconstructions obtained from the commonly used algorithms can grossly misrepresent the object and that the algorithm which produced the best reconstruction when using noiseless data gave unsatisfactory results with noisy data. Equally important are reports in Science, and personal communications by radiologists indicating that in medical practice failure rates of reconstruction vary from four to twenty percent. within this work, the mathematical dilemma posed by Kennan Smith's result is discussed and clarified.