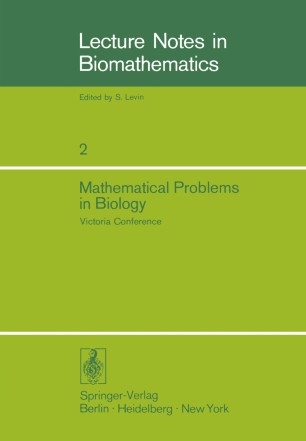 A conference on "Some Mathematical Problems in Biology" was held at the University of Victoria, Victoria, B. C. , Canada, from May 7 - 10, 1973. The participants and invited speakers were mathematicians interested in problems of a biological nature, and scientists actively engaged in developing mathematical models in biological fields. One aim of the conference was to attempt to assess what the recent rapid growth of mathematical interaction with the biosciences has accomplished and may accomplish in the near future. The conference also aimed to expose the problems of communication bet~",een mathematicians and biological scientists, and in doing so to stimulate the interchange of ideas. It was recognised that the topic spans an enormous breadth, and little attempt was made to balance the very diverse areas. Widespread active interest was shown in the conference, and just over one hundred people registered. The varied departments and institutions across North America from which the participants came made it both academically and geographically mixed. The chief activity of the conference was the presentation of papers. Nine invited guest speakers (see table of contents) each gave a one hour talk. These covered a wide range of topics. There were twenty-five shorter (twenty minute) contributed papers, and almost all papers l,rere followed by a five minute question and discussion period. Duplicated abstracts of presented papers were available at the meeting. An evening informal discussion meeting of participants, chaired by Dr. A. B. Tayler, and led by Drs. E. M. Hagmeier, E. C.