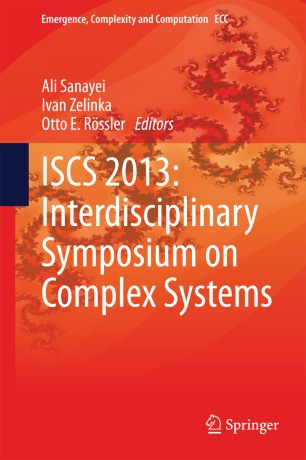 The book you hold in your hands is the outcome of the "ISCS 2013: Interdisciplinary Symposium on Complex Systems" held at the historical capital of Bohemia as a continuation of our series of symposia in the science of complex systems. Prague, one of the most beautiful European cities, has its own beautiful genius loci. Here, a great number of important discoveries were made and many important scientists spent fruitful and creative years to leave unforgettable traces. The perhaps most significant period was the time of Rudolf II who was a great supporter of the art and the science and attracted a great number of prominent minds to Prague. This trend would continue. Tycho Brahe, Niels Henrik Abel, Johannes Kepler, Bernard Bolzano, August Cauchy Christian Doppler, Ernst Mach, Albert Einstein and many others followed developing fundamental mathematical and physical theories or expanding them. Thus in the beginning of the 17th century, Kepler formulated here the first two of his three laws of planetary motion on the basis of Tycho Brahe’s observations. In the 19th century, nowhere differentiable continuous functions (of a fractal character) were constructed here by Bolzano along with a treatise on infinite sets, titled “Paradoxes of Infinity” (1851). Weierstrass would later publish a similar function in 1872. In 1842, Doppler as a professor of mathematics at the Technical University of Prague here first lectured about a physical effect to bear his name later. And the epoch-making physicist Albert Einstein – while being a chaired professor of theoretical physics at the German University of Prague – arrived at the decisive steps of his later finished theory of general relativity during the years 1911–1912. In Prague, also many famous philosophers and writers accomplished their works; for instance, playwright arel ape coined the word "robot" in Prague (“robot” comes from the Czech word “robota” which means “forced labor”).