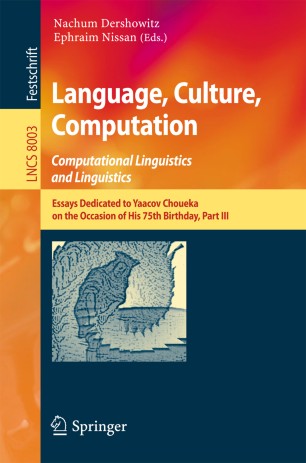 Essays Dedicated to Yaacov Choueka on the Occasion of His 75th Birthday, Part III

This Festschrift volume is published in Honor of Yaacov Choueka on the occasion of this 75th birthday. The present three-volumes liber amicorum, several years in gestation, honours this outstanding Israeli computer scientist and is dedicated to him and to his scientific endeavours. Yaacov's research has had a major impact not only within the walls of academia, but also in the daily life of lay users of such technology that originated from his research. An especially amazing aspect of the temporal span of his scholarly work is that half a century after his influential research from the early 1960s, a project in which he is currently involved is proving to be a sensation, as will become apparent from what follows. Yaacov Choueka began his research career in the theory of computer science, dealing with basic questions regarding the relation between mathematical logic and automata theory. From formal languages, Yaacov moved to natural languages. He was a founder of natural-language processing in Israel, developing numerous tools for Hebrew. He is best known for his primary role, together with Aviezri Fraenkel, in the development of the Responsa Project, one of the earliest fulltext retrieval systems in the world. More recently, he has headed the Friedberg Genizah Project, which is bringing the treasures of the Cairo Genizah into the Digital Age. This third part of the three-volume set covers a range of topics related to language, ranging from linguistics to applications of computation to language, using linguistic tools. The papers are grouped in topical sections on: natural language processing; representing the lexicon; and neologisation.