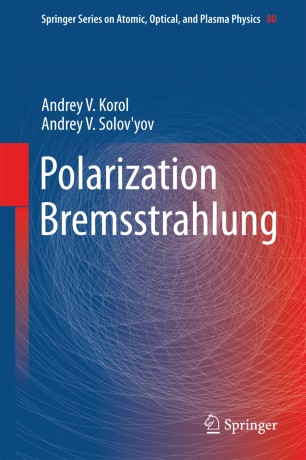 This book introduces and reviews both theory and applications of polarizational bremsstrahlung, i.e. the electromagnetic radiation emitted during collisions of charged particles with structured, thus polarizable targets, such as atoms, molecules and clusters.

The subject, following the first experimental evidence a few decades ago, has gained importance through a number of modern applications.  Thus, the study of several radiative mechanisms is expected to lead to the design of novel light sources, operating in various parts of the electromagnetic spectrum. Conversely, the analysis of the spectral and angular distribution of the photon emission constitutes a new tool for extracting information on the interaction of the colliding particles, and on their internal structure and dynamical properties.

Last but not least, accurate quantitative descriptions of the photon emission processes determine the radiative energy losses of particles in various media, thereby providing essential  information required for e.g. plasma diagnostics as well as astrophysical  and medical applications (such as radiation therapy).

This book primarily addresses graduate students and researchers with a background in atomic, molecular, optical or plasma physics, but will also be of benefit to anyone wishing to enter the field.