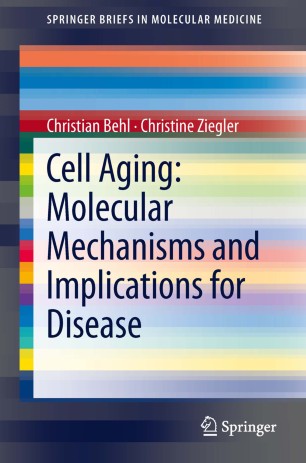 Part of the SpringerBriefs in Molecular Medicine book series (BRIEFSMOME)

Aging represents a physiological and per se non-pathological and multifactorial process involving a set of key genes and mechanisms being triggered by different endogenous and exogenous factors. Since aging is a major risk factor in connection with a variety of human disorders, it is increasingly becoming a central topic in biochemical and medical research. The plethora of theories on aging – some of which have been discussed for decades – are neither isolated nor contradictory but instead can be connected in a network of pathways and processes at the cellular and molecular levels. This book summarizes the most prominent and important approaches, focusing on telomeres, DNA damage and oxidative stress as well as on the possible role of nutrition, the interplay between genes and environment (epigenetics) and intracellular protein homeostasis and introduces some genes that have actually extended life spans in animal models. Linking these different determinants of aging with disease, this volume aims to reveal their multiple interdependencies. We see that there is no single “perfect” theory of aging and that instead it is possible to define what the authors call the molecular aging matrix of the cell. A better knowledge of its key mechanisms and the mutual connections between its components will lead to a better understanding of age-associated disorders such as Alzheimer’s disease.