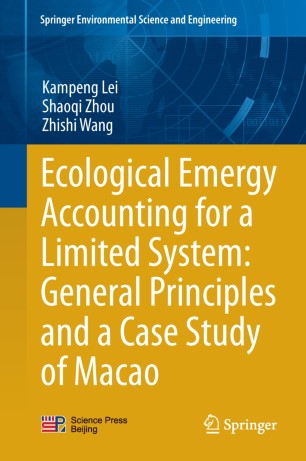 Ecological Emergy Accounting for a Limited System: General Principles and a Case Study of Macao

This book builds on the analyses of Eugene and Howard Odum and introduces the concept of systems ecology. Ecological emergy accounting represents a breakthrough because it allows researchers to integrate man-made capital and natural capital so that human and natural concerns can be addressed using a consistent system of units. This book develops an emergy accounting model that is suitable for describing urban systems, thereby providing a comprehensive picture of those systems. To make the theory concrete, the authors use China’s Macao Special Administrative Region as a case study, and compare the results for Macao with those of other urban ecosystems around the world in the fields of ecological economy, tourism, waste treatment, gambling industry, land reclamation and resource consumption etc.
Dr. Kampeng Lei is a scientist of Macau Science and Technology Association, Macao, China; Shaoqi Zhou is a professor at the College of Environment and Energy, the South China University of Technology, and the Guizhou Academy of Sciences, China; Zhishi Wang is a professor at the Faculty of Science and Technology, the University of Macau, Macao, China.