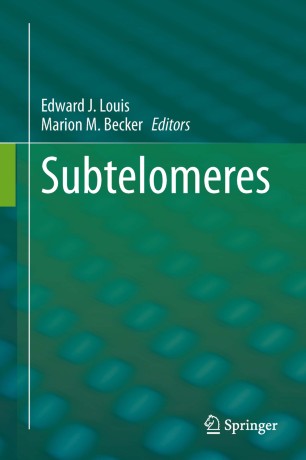 New genes and diversity leading to adaptation and evolution are generated in special areas of genomes. One such area in all eukaryotic genomes and in those prokaryotes with linear chromosomes is the region near the ends of the chromosomes. These telomere-associated sequences, or subtelomeres, have different properties than the rest of the genome and are one of the most exciting frontiers left in genomics.

This book provides a broad introduction to the field of subtelomeres with detailed information from various fields and systems, covering yeasts and fungi, pathogens and parasites, plants, insects, humans and primates and bacteria with linear chromosomes. Advances in the field as well as continuing challenges are discussed throughout. The mosaic nature of this collection and the everchanging perspectives reflect the nature of subtelomeres themselves.

Unlike the core of most genomes, which are conserved and stable over time, subtelomeres are dynamic and polymorphic, so much so that generally no two individuals look alike in these regions. The dynamic nature of the region and the ability to change the copy number, generate diversity and try novel combinations make it the evolutionary tinker’s toolbox. In many organisms the genes found in the region are involved in dealing with the environment. In yeasts, different gene families involved in sugar metabolism as well as clumping together are found in subtelomeres and differences in the region may be the reason why some strains are good for baking, others for brewing and why some are pathogenic. In fungal plant and animal pathogens, many of the genes involved in virulence are found here. In humans and primates there are a number of gene families that vary between ends, for example the diverse olfactory receptor genes. Even in bacterial linear chromosomes the region contains genes involved in adapting to their environments. Perhaps the ultimate use of these regions is in parasites where they rapidly adapt and escape from host immune systems through dynamic changes to the proteins exposed to the host’s defenses. Such dynamic, polymorphic structures are also found in plants and insects though it is not always clear what the function might be; in some cases they take on the role of end maintenance. The dynamic, polymorphic nature of subtelomeres, where many ends share segmental duplications, is an exciting area for study but also presents a difficult challenge from the technical perspective.