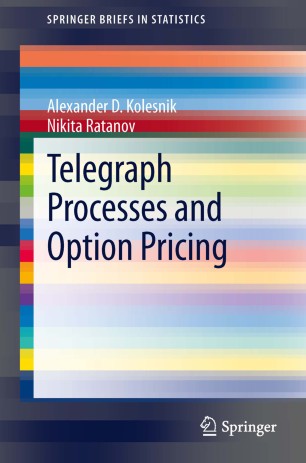 Part of the SpringerBriefs in Statistics book series (BRIEFSSTATIST)

The telegraph process is a useful mathematical model for describing the stochastic motion of a particle that moves with finite speed on the real line and alternates between two possible directions of motion at random time instants. That is why it can be considered as the finite-velocity counterpart of the classical Einstein-Smoluchowski's model of the Brownian motion in which the infinite speed of motion and the infinite intensity of the alternating directions are assumed.

The book will be interesting to specialists in the area of diffusion processes with finite speed of propagation and in financial modelling. It will also be useful for students and postgraduates who are taking their first steps in these intriguing and attractive fields.

Prof. Alexander Dmitry Kolesnik holds PhD in mathematics and physics (1991) and Habilitation in probability and statistics (2010) conferred by the Institute of Mathematics of the National Academy of Sciences of Ukraine, Kiev, Ukraine. At present, he occupies the permanent position of the Leading Scientific Researcher (Professor) at the Institute of Mathematics and Computer Science of the Academy of Sciences of Moldova, Kishinev, Moldova. He has published more than 50 scientific works in various editions and is the external referee for many respected international journals in mathematics, probability, stochastic processes and physics. Prof. Kolesnik is a member of the Global Advisors Board of the International Federation of Nonlinear Analysts (IFNA) and a member of the Expert Board on Mathematics of the National Council for Accreditation and Attestation of Moldova.

“The book is organized into 5 chapters. … this book provides a detailed and rigorous description of the telegraph process on the real line, with a special view to its applications to financial modelling. Researchers and students in related areas will find it of considerable interest.” (Antonio Di Crescenzo, Mathematical Reviews, October, 2014)
Buy options