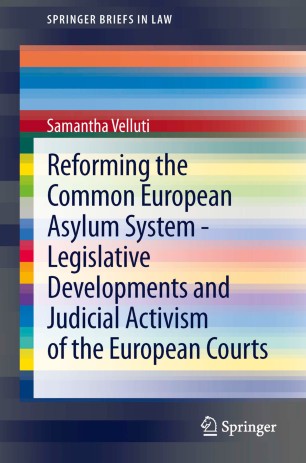 In June 2013, after lengthy and complex negotiations the EU adopted the recast “asylum package” which represents a significant step forward in the future development of CEAS.

In this timely study Velluti provides fresh insights into recent legislative and judicial developments in asylum and through the “lens” of sovereignty she looks at some of the contemporary challenges faced by the EU protection regime, with a particular focus on asylum-seekers’ rights.

The volume assesses whether the EU provides an adequate framework for protecting those seeking international protection from the opposing perspectives of effectiveness and fairness. It shows that, despite the newly adopted “second-generation” legislative acts which include changes aimed at ensuring a stronger level of protection for asylum-seekers, the reform process at European level does not adequately ensure an equal standard of protection across all Member States.

Through a comparative analysis of selected ECtHR and ECJ asylum cases the book also examines the constitutional relationship between the two European Courts and how it impacts on the human rights of asylum-seekers and on the future of EU asylum law.

Ultimately, the book shows that real progress in the development of the human rights dimension of CEAS will be achieved largely through the European and domestic courts.