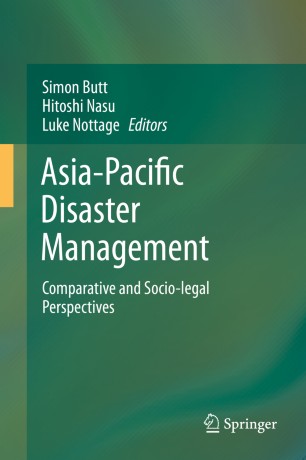 The book outlines the regulatory environment for disaster prevention and management in broad social, economic and political context. The first half of the book focuses mainly on Japan, especially the ‘3.11’ events: the earthquake and tsunami that devastated the Tohoku area on 11 March 2011 and the Fukushima Daiichi nuclear power plant radiation leaks. The second half focuses on the USA (the only other Asia-Pacific country to have experienced a serious nuclear emergency), Indonesia, China, New Zealand, Australia and international law. One question explored in serveral of the 14 chapters is whether socio-legal norms play different roles in preventing and managing responses to natural disasters compared to ‘man-made’ disasters. Another is how ‘disaster law’ interacts with society across very diverse communities in the disaster-prone Asia-Pacific region. The book also addresses the increasingly important roles played by international law and regional regimes for cross-border cooperation in disaster prevention and relief, including the functions played by military forces.

Erudite, pragmatic, and charged with detailed, substantive knowledge of an astonishing range of contexts and research fields, this timely collection of important essays on the law and society of disaster management stands as an exemplary international academic response to the disasters of 11 March 2011. (Annelise Riles)