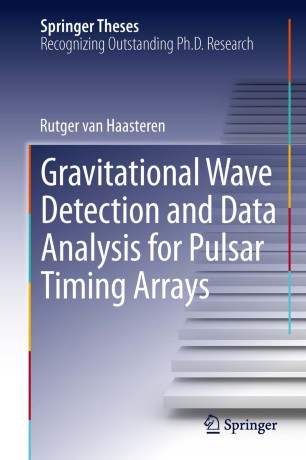 Pulsar timing is a promising method for detecting gravitational waves in the nano-Hertz band.

In his prize winning Ph.D. thesis Rutger van Haasteren deals with how one takes thousands of seemingly random timing residuals which are measured by pulsar observers, and extracts information about the presence and character of the gravitational waves in the nano-Hertz band that are washing over our Galaxy. The author presents a sophisticated mathematical algorithm that deals with this issue. His algorithm is probably the most well-developed of those that are currently in use in the Pulsar Timing Array community.

In chapter 3, the gravitational-wave memory effect is described. This is one of the first descriptions of this interesting effect in relation with pulsar timing, which may become observable in future Pulsar Timing Array projects.

The last part of the work is dedicated to an effort to combine the European pulsar timing data sets in order to search for gravitational waves. This study has placed the most stringent limit to date on the intensity of gravitational waves that are produced by pairs of supermassive black holes dancing around each other in distant galaxies, as well as those that may be produced by vibrating cosmic strings.

Rutger van Haasteren has won the 2011 GWIC Thesis Prize of the Gravitational Wave International Community for his innovative work in various directions of the search for gravitational waves by pulsar timing. The work is presented in this Ph.D. thesis.