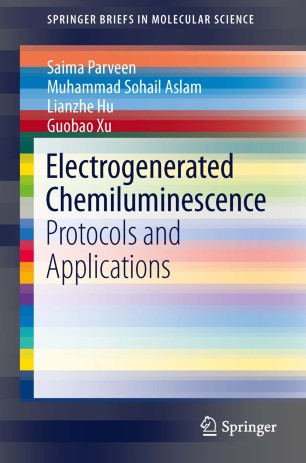 This book primarily focuses on the fundamentals of and new developments in electrochemiluminescence (ECL), presenting high-quality content and explicitly aiming to summarize and disseminate the current state-of-the-art. The topics covered include the fundamental theory, mechanism, types of reactions involved, and the instrumental techniques. The book also examines the applications of ECL in many of the emerging fields of science, such as bioanalytical, analytical, clinical, pharmaceutical, forensic, military, microchip, µTAS, and LED. It will be invaluable to bioanalysts, drug analysts, pharmaceutical researchers and other professionals worldwide, as well as to other interested readers.

Guobao Xu received his BSc in chemistry from Jilin University, his MSC from Xiamen University, and his PhD from the Changchun Institute of Chemistry at the Chinese Academy of Sciences. After postdoctoral research at the University of Hong Kong, the Hong Kong Polytechnic University, and NTT (Nippon Telegraph and Telephone Corporation) Microsystem Integration Laboratories, he joined the Changchun Institute of Chemistry as a professor and is currently deputy director of The State Key Laboratory of Electroanalytical Chemistry. He has been a Fellow of the Royal Society of Chemistry (FRSC) since 2011. His research interests include electroanalytical chemistry, chemically modified electrodes, synthesis and applications of nanomaterials, electrocatalysis, and biosensors. He won the Young Scholar Award of Chinese Chemical society in 2005, the Second Class Award of National Natural Science of China and Excellent Youth Award of the Chinese Society of Electrochemistry in 2009, as well as the 2011 SCOPUS Young Researcher Gold Award in Materials Science from China Science Daily.