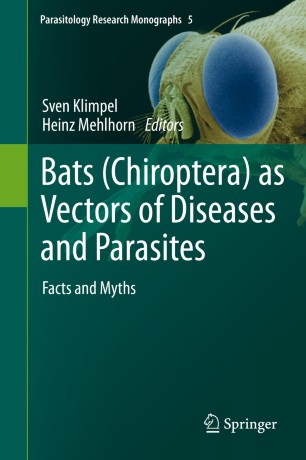 Bats (Chiroptera) as Vectors of Diseases and Parasites

This book gathers contributions by 16 international authors on the phenomenon “bats,” shedding some light on their morphology, the feeding behaviors (insects, fruits, blood) of different groups, their potential and confirmed transmissions of agents of diseases, their endo- and ectoparasites, as well as countless myths surrounding their lifestyle (e.g. vampirism, chupacabras, batman etc.).

Bats have been known in different cultures for several thousand centuries, however their nocturnal activities have made them mysterious and led to many legends and myths, while proven facts remained scarce. Even today, our knowledge of bats remains limited compared to other groups in the animal kingdom. Also, their famous ability to avoid collisions with obstacles during their nightly flights with the help of a sophisticated and unique system using ultrasound waves (which are transmitted and received) is as poorly studied as birds finding their way from continent to continent. In recent times, where globalization transports millions of people and goods from one end of the earth to the other, there are increased risks posed by agents of diseases, as a result of which bats have received increasing attention as potential vectors. These suppositions are based on their proven transmission of viruses such as rabies.

In dedicated chapters, the book addresses the following topics:

• The world of bats

• The astonishing morphology of bats

• Glimpses into how bats fly

• Vampirism in medicine and culture

As such, this book provides a broad range of information for all non-experts interested in biological topics, but also for people working in this field, as well as physicians and veterinarians who are confronted with clinical cases, and for teachers and students interested in expanding their knowledge of biology and of past and present cultures.

“From bat biology to parasites of bats to vampirism, this book covers a wide range of topics. The purpose is to share knowledge about different features of bats, including morphology, potential vectorship of infectious diseases, and parasites of bats. The intended audience includes those involved in bat research and public health.” (Adam W. Stern, Doody’s Book Reviews, February, 2014)