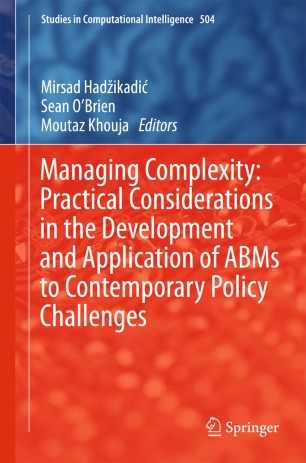 Managing Complexity: Practical Considerations in the Development and Application of ABMs to Contemporary Policy Challenges

This book emerged out of a project initiated and funded by the Defense Advanced Research Projects Agency (DARPA) that sought to build on efforts to transform agent-based models into platforms for predicting and evaluating policy responses to real world challenges around the world.  It began with the observation that social science theories of human behavior are often used to estimate the consequences of alternative policy responses to important issues and challenges.  However, alternative theories that remain subject to contradictory claims are ill suited to inform policy.

The vision behind the DARPA project was to mine the social sciences literature for alternative theories of human behavior, and then formalize, instantiate, and integrate them within the context of an agent-based modeling system.  The research team developed an experimental platform to evaluate the conditions under which alternative theories and groups of theories applied.  The end result was a proof of concept—developed from the ground up—of social knowledge that could be used as an informative guide for policy analysis. This book describes in detail the process of designing and implementing a pilot system that helped DARPA assess the feasibility of a computational social science project on a large scale.