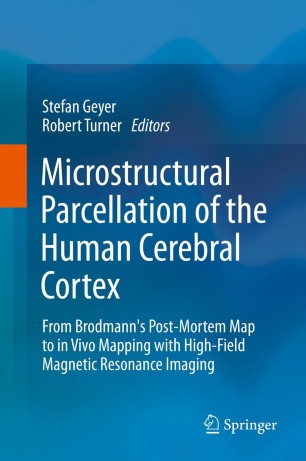 Unraveling the functional properties of structural elements in the brain is one of the fundamental goals of neuroscientific research. In the cerebral cortex this is no mean feat, since cortical areas are defined microstructurally in post-mortem brains but functionally in living brains with electrophysiological or neuroimaging techniques – and cortical areas vary in their topographical properties across individual brains. Being able to map both microstructure and function in the same brains noninvasively in vivo would represent a huge leap forward. In recent years, high-field magnetic resonance imaging (MRI) technologies with spatial resolution below 0.5 mm have set the stage for this by detecting structural differences within the human cerebral cortex, beyond the Stria of Gennari. This provides the basis for an in vivo microanatomical brain map, with the enormous potential to make direct correlations between microstructure and function in living human brains.

This book starts with Brodmann’s post-mortem map published in the early 20th century, moves on to the almost forgotten microstructural maps of von Economo and Koskinas and the Vogt-Vogt school, sheds some light on more recent approaches that aim at mapping cortical areas noninvasively in living human brains, and culminates with the concept of “in vivo Brodmann mapping” using high-field MRI, which was introduced in the early 21st century.