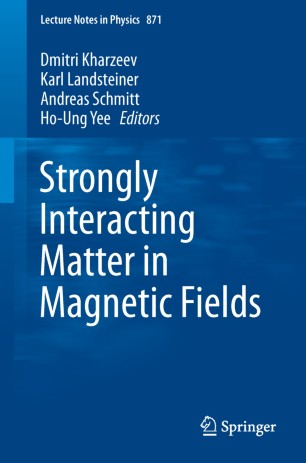 The physics of strongly interacting matter in an external magnetic field is presently emerging as a topic of great cross-disciplinary interest for particle, nuclear, astro- and condensed matter physicists.

It is known that strong magnetic fields are created in heavy ion collisions, an insight that has made it possible to study a variety of surprising and intriguing phenomena that emerge from the interplay of quantum anomalies, the topology of non-Abelian gauge fields, and the magnetic field. In particular, the non-trivial topological configurations of the gluon field induce a non-dissipative electric current in the presence of a magnetic field. These phenomena have led to an extended formulation of relativistic hydrodynamics, called chiral magnetohydrodynamics.

Hitherto unexpected applications in condensed matter physics include graphene and topological insulators. Other fields of application include astrophysics, where strong magnetic fields exist in magnetars and pulsars.

Last but not least, an important new theoretical tool that will be revisited and which made much of the progress surveyed in this book possible is the holographic principle - the correspondence between quantum field theory and gravity in extra dimensions.

Edited and authored by the pioneers and leading experts in this newly emerging field, this book offers a valuable resource for a broad community of physicists and graduate students.