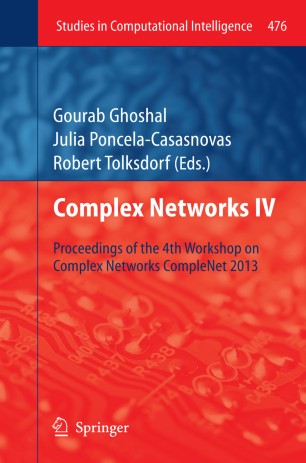 Proceedings of the 4th Workshop on Complex Networks CompleNet 2013

A network is a mathematical object consisting of a set of points (called vertices or nodes) that are connected to each other in some fashion by lines (called edges). Turns out this simple description corresponds to a bewildering array of systems in the real world, ranging from technological ones such as the Internet and World Wide Web, biological networks such as that of connections of the nervous systems or blood vessels, food webs, protein interactions, infrastructural systems such as networks of roads, airports or the power-grid, to patterns of social acquaintance such as friendship, network of Hollywood actors, connections between business houses and many more.

Recent years have witnessed a substantial amount of interest within the scientific community in the properties of these networks. The emergence of the internet in particular, coupled with the widespread availability of inexpensive computing resources has facilitated studies ranging from large scale empirical analysis of networks in the real world, to the development of theoretical models and tools to explore the various properties of these systems. The study of networks is broadly interdisciplinary and central developments have occurred in many fields, including mathematics, physics, computer and information sciences, biology, and the social sciences.

This book brings together a collection of cutting-edge research in the field from a diverse array of researchers ranging from physicists to social scientists, and presents them in a coherent fashion, highlighting the strong interconnections between the different areas. Topics included are social networks and social media, opinion and innovation diffusion, syncronization, transportation networks and human mobility, as well as theory, modeling and metrics of Complex Networks.