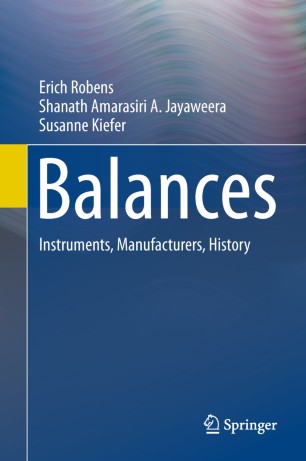 The book deals mainly with direct mass determination by means of a conventional balances. It covers the history of the balance from the beginnings in Egypt earlier than 3000 BC to recent developments. All balance types are described with emphasis on scientific balances. Methods of indirect mass determination, which are applied to very light objects like molecules and the basic particles of matter and celestial bodies, are included.  As additional guidance, today’s manufacturers are listed and the profile of important companies is reviewed.
Several hundred photographs, reproductions and drawings show instruments and their uses. This book includes commercial weighing instruments for merchandise and raw materials in workshops as well as symbolic weighing in the ancient Egyptian’s ceremony of ‘Weighing of the Heart’, the Greek fate balance, the Roman  Justitia, Juno Moneta and Middle Ages scenes of the Last Judgement with Jesus or St. Michael and of modern balances. The photographs are selected from the slide-archives of the late Richard Vieweg (1896-1972) (former President of the Physikalisch-Technische Bundesanstalt, Braunschweig, Germany), of the late Hans R. Jenemann (1920-1966) (former head of the Analytical Laboratory of Schott & Gen., Mainz, Germany) and of his wife Irene (1933-2008) and of Erich Robens.