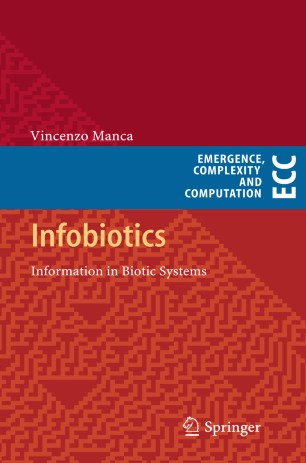 The book presents topics in discrete biomathematics. Mathematics has been widely used in modeling biological phenomena. However, the molecular and discrete nature of basic life processes suggests that their logic follow principles that are intrinsically based on discrete and informational mechanisms. The ultimate reason of  polymers, as key element of life, is directly based on the computational power of strings, and the intrinsic necessity of metabolism is related to the mathematical notion of multiset.

The switch of the two roots of bioinformatics suggests a change of perspective. In bioinformatics, the biologists ask computer scientists to assist them in processing biological data. Conversely, in infobiotics mathematicians and computer scientists investigate principles and theories yielding new interpretation keys of biological phenomena. Life is too important to be investigated by biologists alone, and though computers are essential to process data from biological laboratories, many fundamental questions about life can be appropriately answered by a perspicacious intervention of mathematicians, computer scientists, and physicists, who will complement the work of chemists, biochemists, biologists, and medical investigators.

The volume is organized in seven chapters. The first part is devoted to research topics (Discrete information and life, Strings and genomes, Algorithms and Biorhythms, Life Strategies), the second one to mathematical backgrounds (Numbers and Measures, Languages and Grammars, Combinations and Chances).