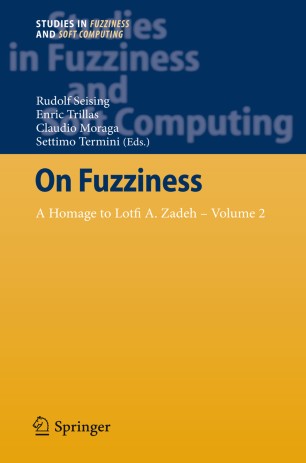 A Homage to Lotfi A. Zadeh – Volume 2

Part of the Studies in Fuzziness and Soft Computing book series (STUDFUZZ, volume 299)

The notion of Fuzziness stands as one of the really new concepts that have recently enriched the world of Science.  Science grows not only through technical and formal advances on one side and useful applications on the other side, but also as consequence of the introduction and assimilation of new concepts in its corpus. These, in turn, produce new developments and applications. And this is what Fuzziness, one of the few new concepts arisen in the XX Century, has been doing so far.

This book aims at paying homage to Professor Lotfi A. Zadeh, the “father of fuzzy logic” and also at giving credit to his exceptional work and personality. In a way, this is reflected in the variety of contributions collected in the book. In some of them the authors chose to speak of personal meetings with Lotfi; in others, they discussed how certain papers of Zadeh were able to open for them a new research horizon. Some contributions documented results obtained from the author/s after taking inspiration from a particular idea of Zadeh, thus implicitly acknowledging him.

Finally, there are contributions of several “third generation fuzzysists or softies” who were firstly led into the world of Fuzziness by a disciple of Lotfi Zadeh, who, following his example, took care of opening for them a new road in science.

Rudolf Seising is Adjoint Researcher at the European Centre for Soft Computing in Mieres, Asturias (Spain).

Settimo Termini is Professor of Theoretical Computer Science at the University of Palermo, Italy and Affiliated Researcher at the European Centre for Soft Computing, Mieres, Asturias (Spain)