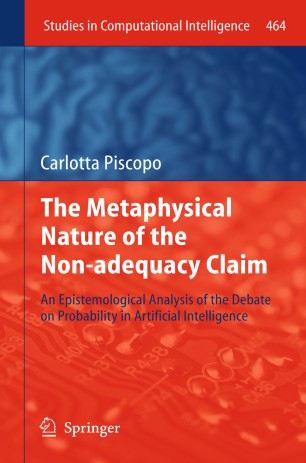 The Metaphysical Nature of the Non-adequacy Claim

An Epistemological Analysis of the Debate on Probability in Artificial Intelligence

Over the last two decades, the field of artificial intelligence has experienced a separation into two schools that hold opposite opinions on how uncertainty should be treated. This separation is the result of a debate that began at the end of the 1960’s when AI first faced the problem of building machines required to make decisions and act in the real world. This debate witnessed the contraposition between the mainstream school, which relied on probability for handling uncertainty, and an alternative school, which criticized the adequacy of probability in AI applications and developed alternative formalisms.

The debate has focused on the technical aspects of the criticisms raised against probability while neglecting an important element of contrast. This element is of an epistemological nature, and is therefore exquisitely philosophical. In this book, the historical context in which the debate on probability developed is presented and the key components of the technical criticisms therein are illustrated. By referring to the original texts, the epistemological element that has been neglected in the debate is analyzed in detail. Through a philosophical analysis of the epistemological element it is argued that this element is metaphysical in Popper’s sense. It is shown that this element cannot be tested nor possibly disproved on the basis of experience and is therefore extra-scientific. Ii is established that a philosophical analysis is now compelling in order to both solve the problematic division that characterizes the uncertainty field and to secure the foundations of the field itself.

“This book analyzes the evolution of the treatment of uncertainty in the field of artificial intelligence (AI). … AI practitioners and researchers interested in the foundations of probabilistic models for AI probably make up one part of the audience. On the other hand, philosophers interested in the history of science, in particular in the unfolding of basic disputes in science, may be greatly interested in this book.” (Marcelo Finger, Computing Reviews, July, 2013)
Buy options