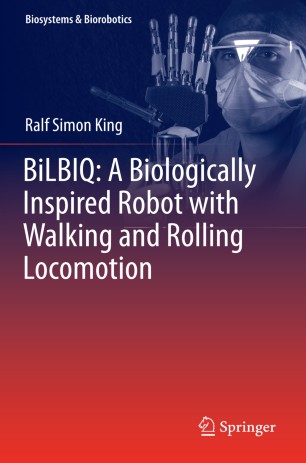 BiLBIQ: A Biologically Inspired Robot with Walking and Rolling Locomotion

The book ‘BiLBIQ: A biologically inspired Robot with walking and rolling locomotion’ deals with implementing a locomotion behavior observed in the biological archetype Cebrennus villosus to a robot prototype whose structural design needs to be developed.

The biological sample is investigated as far as possible and compared to other evolutional solutions within the framework of nature’s inventions. Current achievements in robotics are examined and evaluated for their relation and relevance to the robot prototype in question. An overview of what is state of the art in actuation ensures the choice of the hardware available and most suitable for this project. Through a constant consideration of the achievement of two fundamentally different ways of locomotion with one and the same structure, a robot design is developed and constructed taking hardware constraints into account. The development of a special leg structure that needs to resemble and replace body elements of the biological archetype is a special challenge to be dealt with. Finally a robot prototype was achieved, which is able to walk and roll - inspired by the spider Cebrennus villosus.